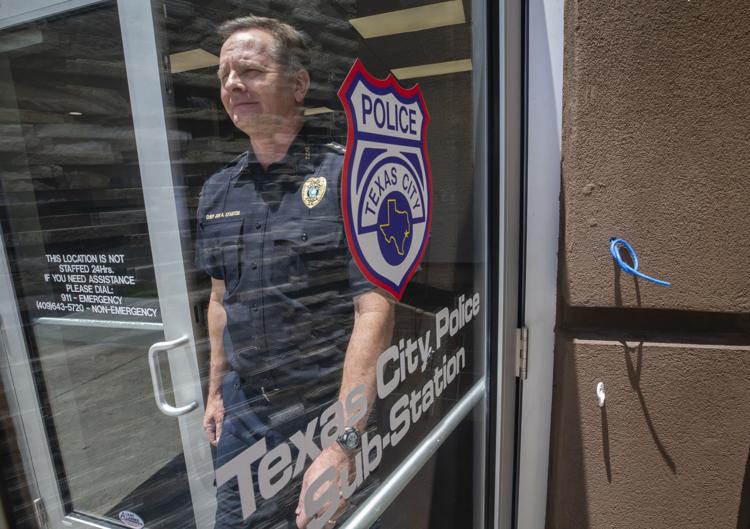 By MICHAEL A. SMITH

The Texas City Police Department substation soon to open at Mainland City Centre — formerly known as the Mall of the Mainland — is good news for the city, the property owner and for residents.

It’s also a somewhat rare example of an actual public-private partnership, in that the public and private sector players in the deal seem to get more or less equal benefit from the arrangement.

“We’ve been talking about this since 25 years ago, getting out this way,” Stanton said.

The roughly 800-square-foot station, 10000 Emmett F. Lowry Expressway, came about with the help of Friendswood attorney and developer Jerome Karam, who owns and has spent years and millions re-tasking the old mall to be viable in a changing economy.

Karam approached city officials nearly two years ago with his offer to renovate a building, build it out and give it to the police department rent-free, he said.

“We wanted to make it easier on them, and it also makes it easier on us if we have an incident,” Karam said. “So, we went to talk to the mayor and the police chief, and both of them were great.”

Karam invested almost $100,000 of his own money into the building, which has now received city approval with the keys turned over to Stanton, Karam said. Now, it’s just a matter of getting moved in.

The station will allow the police department to better serve a growing part of the city, officials said.

“It’ll be good to have a police presence on the west side of the city where a lot of the growth is taking place,” Texas City Mayor Matt Doyle said. “It’s very close to I-45.

“It makes it more convenient for our officers who are working that side of the city to write reports. And it’s a benefit for the mall to have a police presence there.”

The advantages of having a substation on the west side of Texas City include officers using it for briefings, interviews and taking breaks, as well as residents being able to file police reports rather than having to drive all the way to the main Texas City police station, 1004 Ninth Ave. N., to do so. About half of the department’s officers are assigned to patrol west of state Highway 146, Stanton said.

The police department’s Citizens Police Academy and the Texas City Explorer Program, a free program that focuses on developing young adults between the ages of 14 and 21, will be able to meet at the new substation.

When the new substation opens, each of the two police department offices will be assigned a sergeant on duty along with a set amount of officers. The substation will have four or five officers assigned to that location at any given time, Stanton said.

“When we get in here, it’s going to be very, very helpful for our citizens and our businesses out here,” Stanton said. “Logistically, for us to be able to come out here and have the officers meet and do their briefing and go from this location instead of driving 10 to 15 minutes just to get to their district. This is going to be very helpful us.”

“We’re just thrilled and excited to have them there, and now they don’t have to drive all the way back to the station,” Karam said.

The new station will benefit the department, patrons and tenants of the mall and nearby residents by allowing officers to work more efficiently and spend more time answering calls.

That’s a good example of a real public-private partnership and good to see. Everyone involved deserves congratulations.